Are you kidding, Milk in Chalk? One More Consideration for 504 Plans 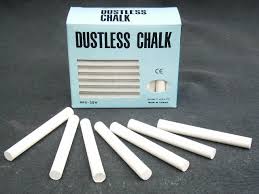 This past Spring 2013, results of a study conducted in
Spain were released, which concludes that children with milk allergies may react to the dust from chalk in their schools.  Why?  Because the common chalk used by schools and teachers contains the milk protein casein.  Yes, milk in chalk.  That means children can breath in the allergen and have an allergic reaction.  The study is summarized at this link:  Milk in Chalk.

To be specific, the chalk in question is called "no dust" or "low dust" or "anti dust" chalk.  The formula to eliminate the dustiness of chalk apparently includes milk.  A simple Google search revealed that this has been covered in the press a lot actually.  See this recent article from just a couple of weeks ago.  The study showed that children with a milk allergy could have an allergic reaction from breathing in the chalk particles in the air, but I wonder if anyone has studied what happens if the children use the chalk and get it on their hands or what happens if they get it in their mouths, from cross contact with their hands or directly.  I have even more questions, such as whether the study examined the most severely milk allergic kids who have anaphylactic allergies to small amounts of protein or those with severe asthma, who are probably already sensitive to regular chalk dust particles.

Legally, what does all of this mean?  Well, first, because chalk is not a food, Milk or any other allergen does not need to be included on the chalk's label.  In other words, you will have no warning that this product may cause a reaction in your milk allergic kid.  It might also explain mystery reactions or asthma attacks your child may have had at home or school.

This is something that should be raised in discussing the 504 Plan with your school if your child is allergic to milk.  Ask whether the school has any chalk boards, either on the walls or portable, and if so, what kind of chalk is used.  Ask the school to contact the manufacturer and get a written statement as to whether the chalk contains casein or any milk protein.  Restrict the chalk from any room or environment in which your child is located during the school day, not just when your child is in the room.  If the dust is spread around the room before your child enters, it still has a chance of coming into contact with your child.  Ask about art projects which might contain chalk.

This definitely leaves me wondering what else contains milk protein that we don't know about.
Posted by Unknown at 11:28 AM